The Stinal Countdown: Goosebumps SlappyWorld #10: Diary of a Dummy

Dear Diary. In my travels to cover every notable Goosebumps book, I recently covered The Dummy Meets the Mummy! and it was... I still have no idea. But here we are again. Another experience with Slappy. How will we fare this time? It's time to open the book and see what the dummy keeps to himself. It's time for Diary of a Dummy. 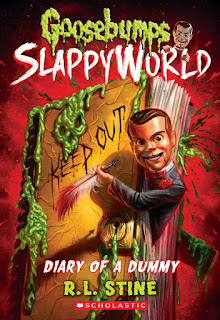 Why look. It's another SlappyWorld cover that I really like. That keeps happening for some reason. I love the detail of the diary itself. How worn down it looks. But then there's the green slime, which of course makes me think Monster Blood, but thankfully that's not for another three books from this one. The slime forming a skull seems a bit silly though, like something a Shivers cover would do. And while, again, movie Slappy isn't my favorite look for him, I'll admit that Dorman is doing an excellent job in making him look expressive and sinister. Another one that hits it out of the ballpark.
Read more »
at May 14, 2021 No comments:

The Stinal Countdown: Goosebumps #38: The Abominable Snowman of Pasadena

And now we enter a book I really wasn't fond of last time. A book that had so much potential, but Stine wasted it by changing the focus mid-story. Has time melted away that anger? Let's see with The Abominable Showman of Pasadena.

THE ABOMINABLE SNOWMAN OF PASADENA 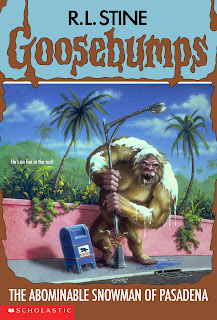 I like this cover. A good mixture of the warm and sunny Pasadena environment with the abominable snowman who looks to have just waked up and is on a rampage. The downside being, obviously, that we never get any of this in the book, which would have made for such a strong climax. Regardless, a quality piece of work, even if the nipples creep me out in all the wrong ways.

Jordan Blake and his sister, Nicole, are sick of the hot weather in Pasadena. Just once they'd like to have a real winter. A real winter with real snow.

And then it happens. The Blakes are off to Alaska! Seems that Mr. Blake has been asked to photograph a mysterious snow creature there.

Poor Jordan and Nicole. They just wanted to see snow. But now they're being chased by a mysterious creature. A big furry-faced creature...Known as the Abominable Snowman!

Time to fast forward Fear Street a bit into the year 1994. Stine had been doing the franchise five years deep into this point, so it'll be interesting to see what, if any, changes to the tone of the series came to be. And what better choice than a book that seemingly dares me to give it a review. It's time to talk about The Dare. 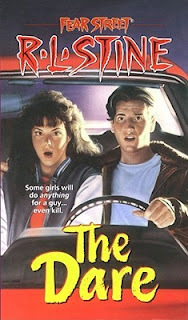 Cover is fine, but doesn't really sell much on the concept of the book, or even what the aforementioned dare actually is. I'd think going by the cover it feels more like selling the idea of a game of chicken than anything else. Other than that, it's forgettable.
Read more »
at May 11, 2021 No comments:

NNtG: Ghosts of Fear Street #13: How to Be a Vampire

It's time for another trip into the kid friendly section of Shadyside for a new Ghosts of Fear Street blog. Now that we're going through the OG Fear Street, we can see how different things are already starting to feel between both series. And it's time to continue that look as we talk vampires in this edition. Will this book bite or simply be a case of "fangs for nothing"? Let's learn How to Be a Vampire. 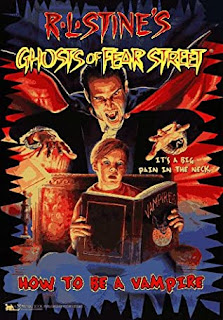 Cover is fine. I like the touch of the kid reading the vampire book with the vampire looming behind him, ready to strike. It's not the most super dynamic cover, but for a book about vampires, it does exactly what it has to, so points there.

The Stinal Showdown: The Headless Ghost

While I don't review much of the Goosebumps TV show, sometimes one concept I do like to dabble with is the idea of which medium told the work better. Stine's original novelization or the television series. And with The Headless Ghost having enough in both takes to feel drastically different from one another, why not dig this back up. It's time to go head to head, literally and see which did a better job. It's Headless Ghost vs Headless Ghost.

Check Out my Blogs